A deep dive into the creation and designing of the Halloween release of Mako Studio’s 3D prop arsenal, a nailed Baseball club named “Totem Teeth”

Firstly, Mako would like to extend its heartfelt Halloween wishes to all of its readers. Crack up a good and responsible scare out there!
The article discusses the process undertaken to re-create the 3D prop version of a legendary pop culture horror weapon, the Nailed Bat, in abstract detail. The nailed bat plays a highlighted role in elevating scenes towards a mix of excitement and fear within the consumer’s mind as it is creatively situated alongside popular characters and shows like Jason Voorhees and Stranger Things.

Initiation: The referencing and sketching phase 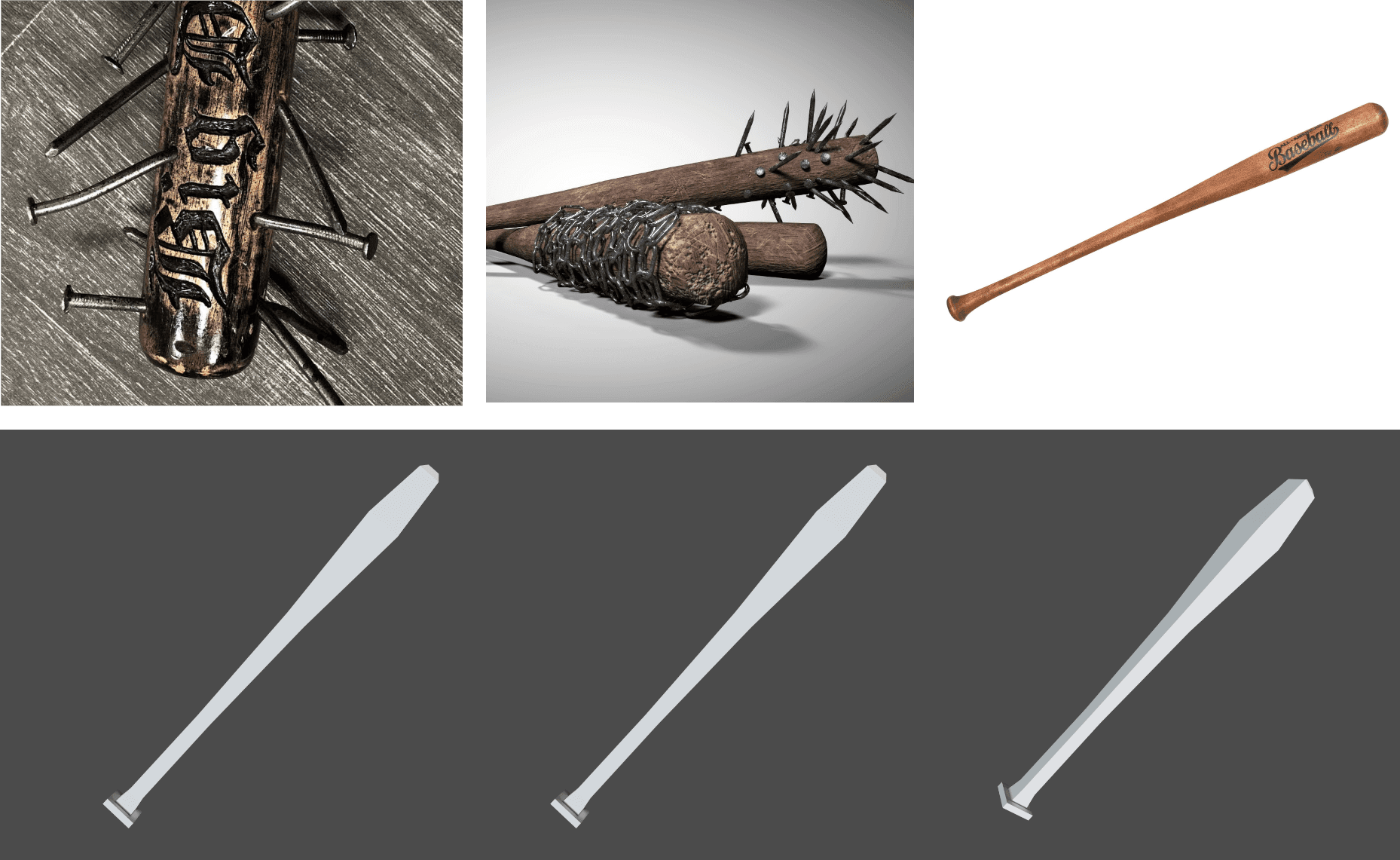 The advent of awesome artwork is always from appropriate references. The art, as it is, is backed by a preliminary sketch that takes inspiration from at least 150 different versions of a medieval mercenary weapon. The core difference is that the weapon has been augmented to a modern version by substituting its handle with a Baseball club and the nails, with actual doornails.
Scurrying extensively through forums like Pinterest, 80lv and Reddit has, step-by-step, developed a rather competent foundation for the Nailed Bat, which has only been complemented by the preliminary 2D illustrations made by Mako’s sketch artists in elaborating on its various dimensions. 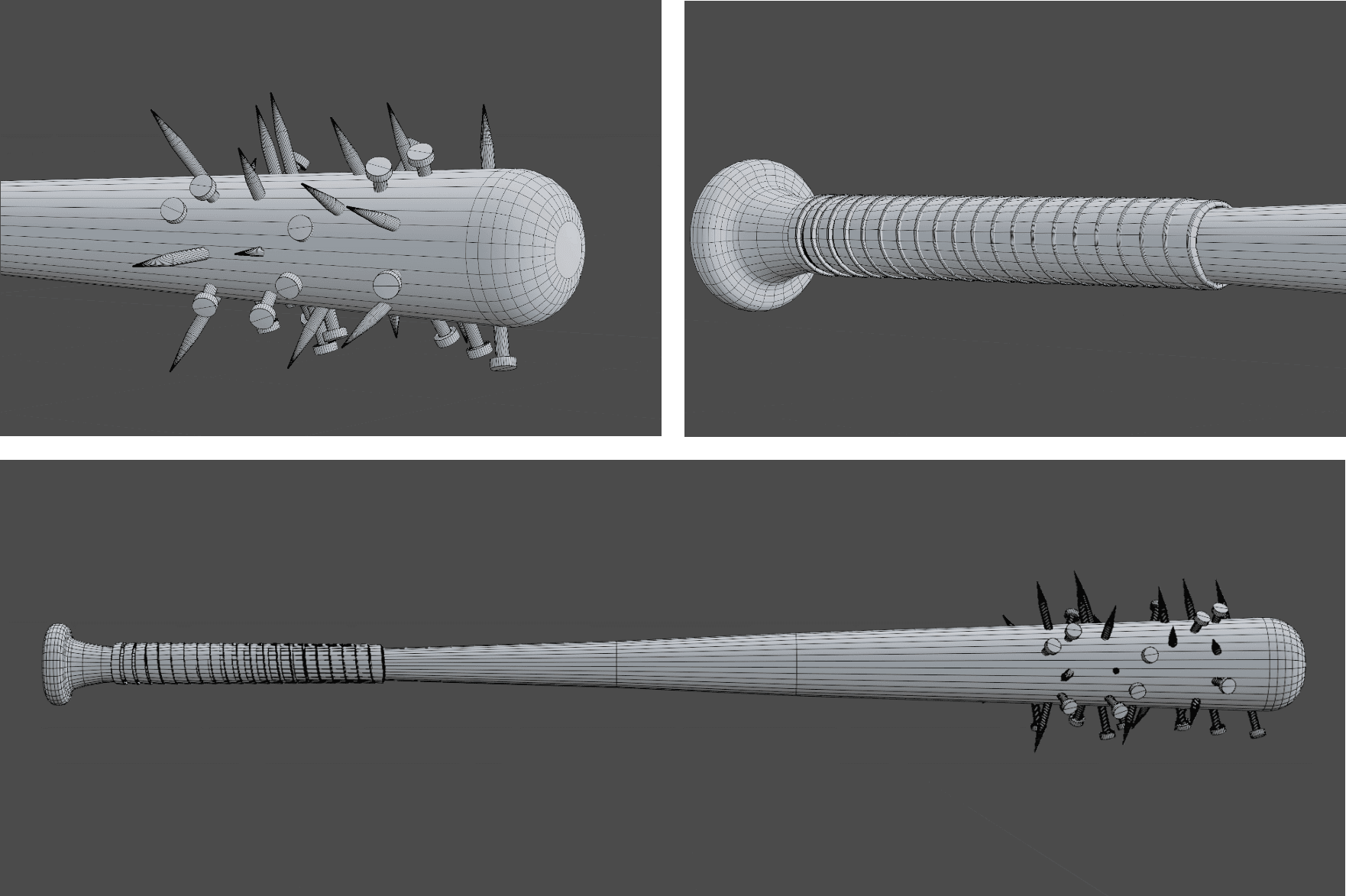 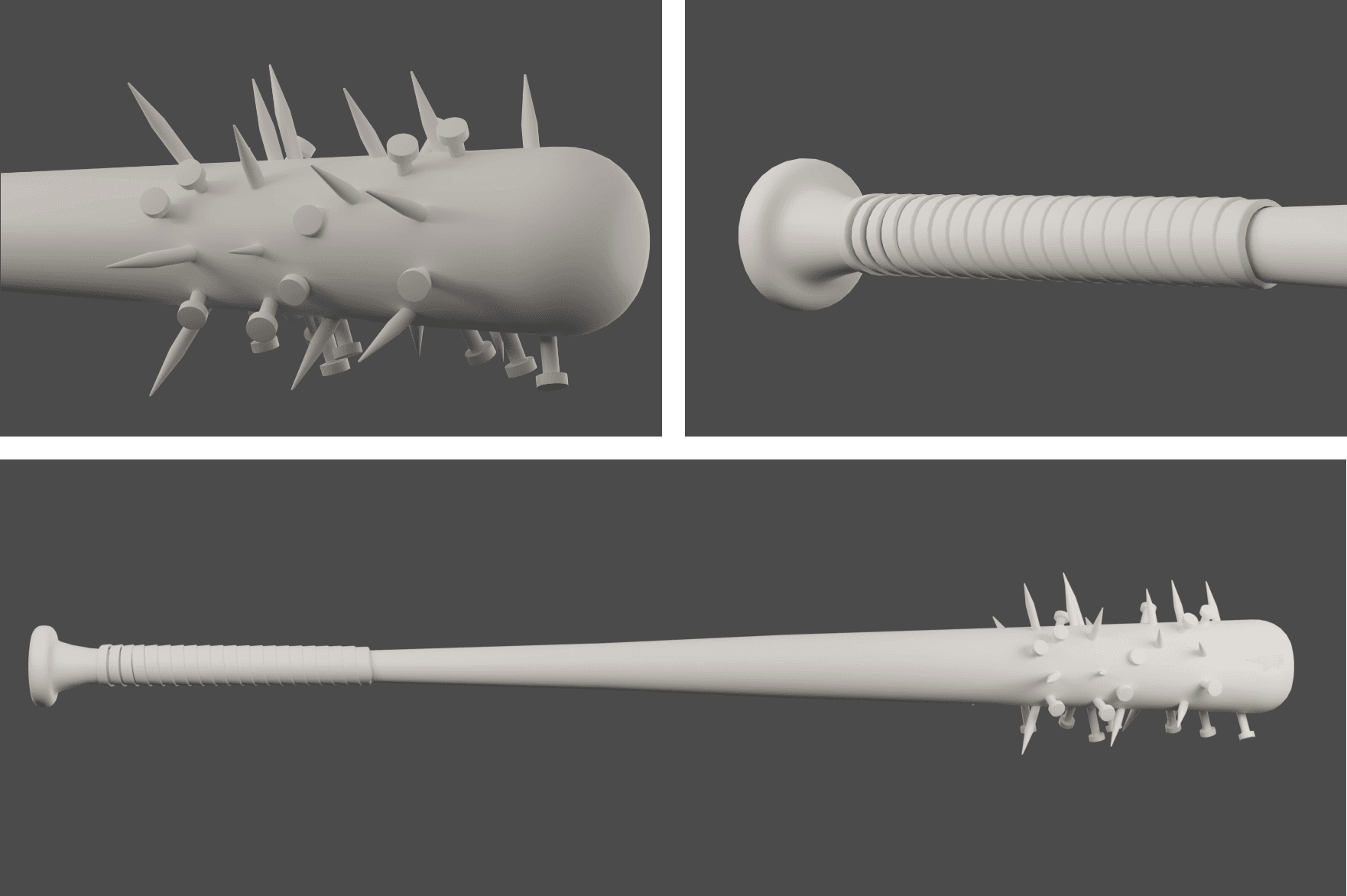 3D art takes its own sweet time because of the two cardinal steps that differentiate them from 2D illustrations, the modelling and the texturing processes. Elaborating on the first of those processes, the Nailed Bat takes its shape from an amalgamation of the craft-paper models of the bat and the nails, which went through their own referencing and sketching processes.
The initiation of sculpting phase began with the blocking out of the bat and the nails, which started from two rectangles respectively. Chipping these rectangles off by the pixel gave the artists a basic low-poly rendition of the club and the nail separately. The next task in the bucket proved to be the real challenge, which warranted extensive and intricate modelling of the low-poly assets to a much more clear definition. 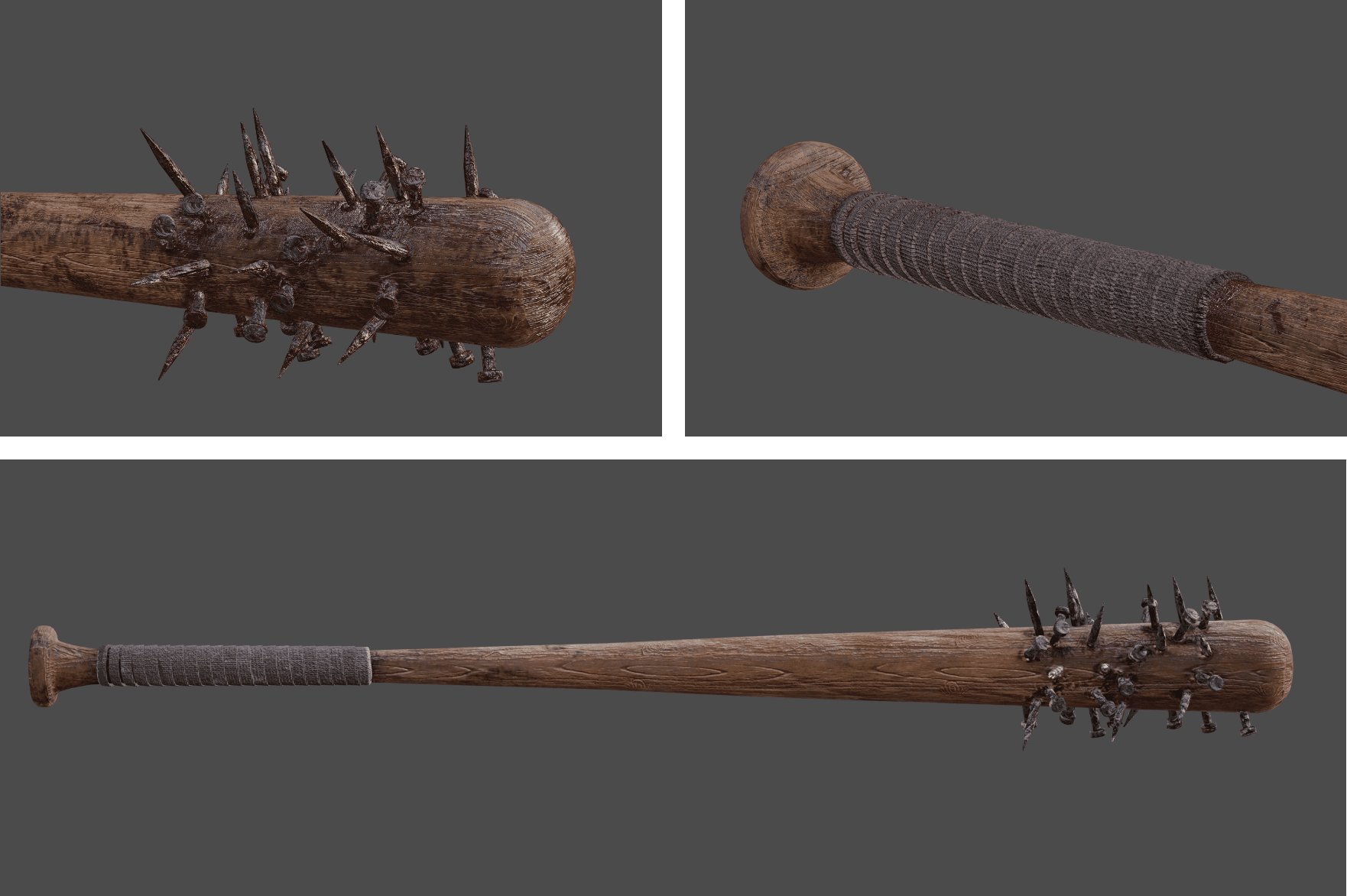 Fulfilling another core process within Tooth Fairy’s design pipeline is the texturing phase, which is all about boosting realism with the details engraved on the asset. The process further divides itself into two sub-processes, UV Mapping and texturing. UV mapping requires the whole model to be unwrapped to a mesh to enable the artist to appropriately mark the model’s surface. Post the mapping process, the mesh is then embellished on the surface of the finished 3D model to absorb the textures laid onto it. The unwrapped UV is then sent to Substance Painter, where the foundations for the core texturing processes are laid by the artist.
The textures were then laid out on the mapped model as the artists went through a variety of texture options for each element of the model. In this case, the bat’s wood, the nail’s metallic nature, rust on the nails and the blood splattered all over the Nailed Bat.

Rendering: Baking the flour into bread 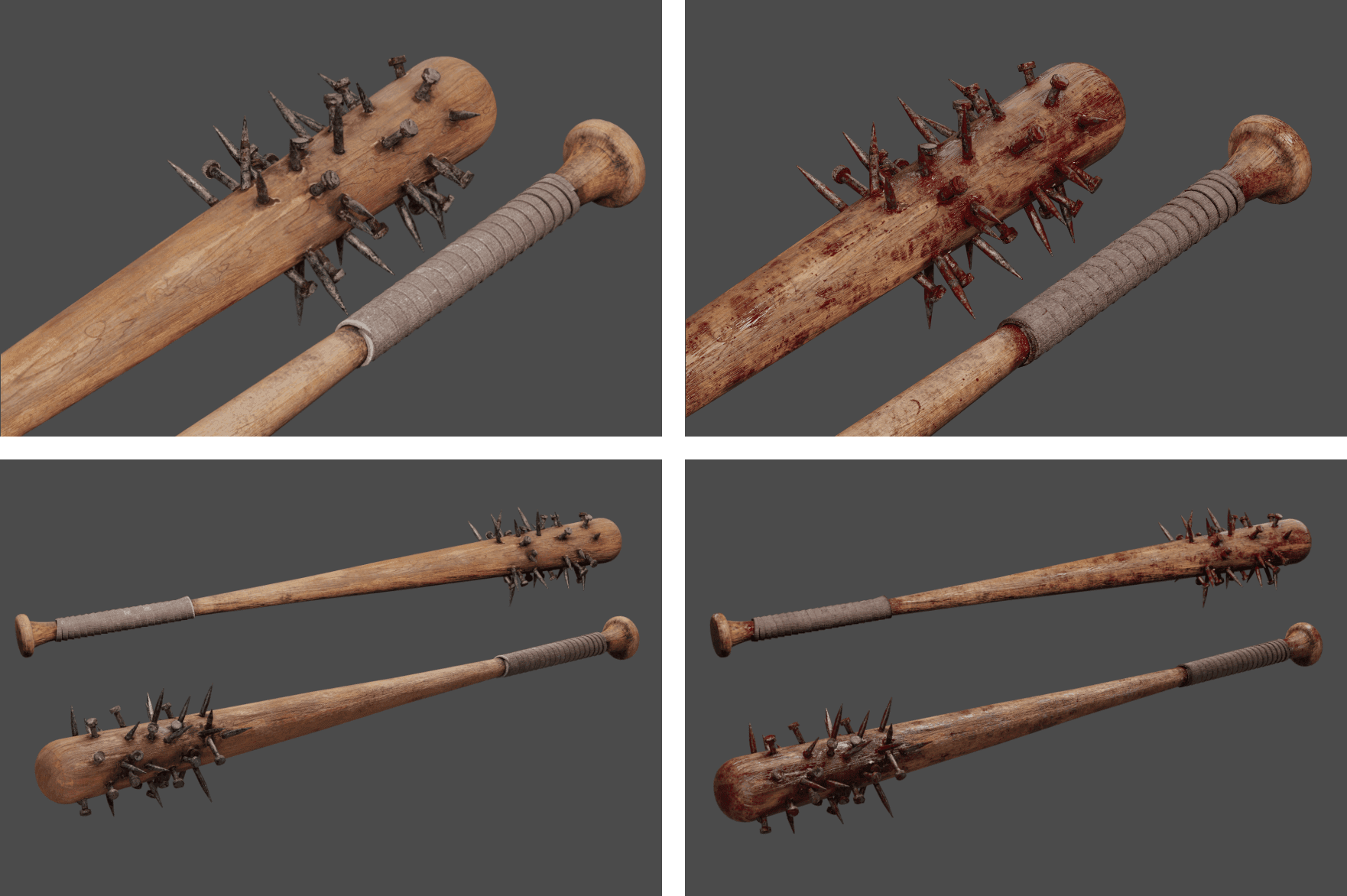 As the title states, a designed prop is rarely of any use unless it has been rendered into a usable asset. This time-extensive process stands as the biggest elephant in the room for all 3D designers and for a grassroots studio, it is a Mammoth awaiting the stampede call. The delivery time of every 3D asset is solely dependent on the rendering duration. This is often undeterminable as they are ruled by the number of frames, amount of detailing and the entities on screen per frame. For single-frame entities like 3D assets, rendering is a relatively hardware-easy and time-effective process as far as Blender is concerned.
Mako’s trademark of designing optimized assets with maximum detailing is its secret recipe for success in the asset outsourcing business. 3D assets like the Nailed Bat trace their use cases to multiple industries like gaming, CGI, variety entertainment, extended reality and even web design; displaying massive potential with their availability and versatility factors.

Let us bridge ideas with intelligence. Touch base with us.